Reducing the Risk in Automation Design

A Case for Smart Conveyance

In today’s competitive manufacturing landscape, business leaders need to be able to scale and adapt their production to meet changing consumer demands. In manufacturing, what is produced varies greatly from industry to industry, yet we often see overlap in the general functionality that system designers are hoping to achieve from their automation.

For example, the ability to increase production without increasing footprint will be a must-have for many manufacturers when it comes to their automation. We’ll talk more about this shortly.

But the biggest thing we hear both systems designers and business leaders asking for, regardless of industry, is high-performing automation with low risk.

Before we look at specific industry examples and how we can accomplish powerful automation with reduced design and deployment risks, let’s first look at where potential risks arise during the automation design process.

Where does risk come from?

If you’ve ever designed or deployed an automation system, you know that there are a lot of things that can go wrong. The good news is, there are ways to mitigate risks from both the perspective of the system designer as well as the business leader.

While the list we provide below is by no means exhaustive, these are some common concerns we hear from business leaders and system designers:

Now that we’re aware of potential areas of risk, we can work to decrease these factors during the design and deployment of our automation.

As mentioned above, there can be several ways to accomplish your manufacturing and automation design goals. When looking at a piece of automation, the conveyance platform you select will impact nearly every other aspect of the system. From cycle times to station tooling, your conveyance platform affects the design and performance more than any singular component of your automation equipment.

Determining your conveyance early in the system design process can be one of the most effective ways to reduce risk during your automation project.

Why is it important to consider conveyance as the foundation of your automation?

The earlier you start thinking about your conveyance and start to map it out in a simulation, the better you can understand factors such as tooling and space requirements, energy needs, and even operator skill-set requirements. SuperTrak CONVEYANCE™ General Manager Simon Drexler talks more about this in his Ask the Expert Segment – How to Leverage Simulations to Improve the Efficiency of Your Automation.

By focusing on your conveyance early in the design phase, you transform the way automation systems are built, making it easier to not only design but also to develop and deploy.

What is Smart Conveyance?

Once there is a clear understanding of how the conveyance platform impacts system design and performance, you need to understand the types of conveyance that are available and what one is right for you, such as traditional vs. Smart Conveyance.

In this first video, we introduce the concept of Smart Conveyance.

Consumers demand immediacy, they demand quality, and they demand choice. To meet these demands and remain competitive, manufacturers must rethink their production processes.

Automation cells no longer can be looked upon to produce one standardized batch or product. Instead, they need to be flexible and re-deployable to accommodate shorter product life cycles. Engineers are increasingly being tasked with rethinking their current processes to create more efficient and adaptable automation.

Smart Conveyance and the integrated functionality it offers has many benefits when compared to traditional conveyance.

Here’s how you can effectively scale your production.

We spoke earlier about the need for manufactures to scale. This is particularly evident in consumer-goods manufacturing where product lifecycles are constantly changing, and manufacturers need to be able to quickly adapt their automation to keep pace. The modularity of the SuperTrak platform is highlighted below and illustrates scaling your automation at a pace that makes sense for your business.

In additional to the physical system, engineers and system designers can quickly scale controls programming within the TrakMaster™ software to include additional stations and processes utilizing target routing. All this high-performance capability is achieved with less effort because of the amount of integrated functionality that’s packed into the platform.

Smart Conveyance can bring significant benefits to both automation design and performance.

For automotive manufacturers, the need for high throughput and flexible process flows is essential to keep up with product demand.  As you can see in the video below, the SuperTrak GEN3 platform offers independent shuttle control, which allows parts to easily transition between stations without sacrificing cycle time in areas where they need to be slow. With just-in-time manufacturing, production can be ramped up quickly and efficiently when needed.

The ability to vary pitch, destination, and speed throughout the system is driving maximum utilization of every component, eliminating the need for additional tooling and utilizing overall station cycle times more effectively.

As seen in this example below, industry leading speeds of up to 4m/s mean parts spend more time in process and less time in motion. The platform also allows you to index shuttles quickly so one piece of tooling can work on multiple parts rather than one piece of tooling for each part on a shuttle.

High speeds and independent shuttle control can be particularly important to automotive manufacturers where space is at a premium and there is a need for high throughput.

For the Operations Manager, there is less of an upfront investment required because the amount of needed tooling has been reduced while the throughput goals have been maintained resulting in a better ROI for the automation system.

For this medical device application, we were able to reduce the cycle time by taking advantage of the platform’s low settling time.

Tooling can start to work immediately, getting the parts through the stations with more precision and speed. Pre-arrival notifications can also indicate the time until a shuttle arrives in a station so tooling can start moving prior to its arrival which also minimizes cycle time.

Similarly, this syringe assembly application highlights SuperTrak’s on-the-fly functionality. Cycle times can be reduced resulting in more throughput for medical device manufacturing where demand is very high and manufacturers need to be able to scale quickly.

How can you increase throughput and reduce footprint?

Increasing throughput within a minimal amount of space is one of the most common challenges manufacturers face. The videos below highlight how a variety of industries leverage the capabilities of Smart Conveyance to meet their goals.

In the video below, we highlight SuperTrak’s ability to perform asynchronous motion. Here we see an inhaler assembly moving from a 1-up to 2-up process without duplicating stations or adding buffers.

This ability can be particularly beneficial to life science or medical device manufacturers because they are able to take advantage of the speed and flexibility to minimize station requirements and maximize throughput. Your cycle time is no longer limited by your slowest station, so effective cycle times can still be achieved.

The system designer can meet performance requirements with reduced tooling in a minimal amount of space, and the business leader obtains better utilization of floorspace and a faster path to the ROI of their automation.

Similarly, footprint is also a common concern during consumer good manufacturing. Often much of the production is done offshore where space is at a minimum. In this cell phone component application, independent controlled shuttles offer the flexibility to alter pitch which reduces the space needed for tooling and in effect, shrinks the overall system footprint.

Greater speed, precision, and independent shuttle control along with high levels of integrated functionality define the SuperTrak CONVEYANCE™ platform and help manufacturers lower the risks of their automation systems.

Want to learn more about designing your automation with Smart Conveyance? Watch the on-demand webinar: Tips for Engineers to Increase Performance and Decrease Complexity. 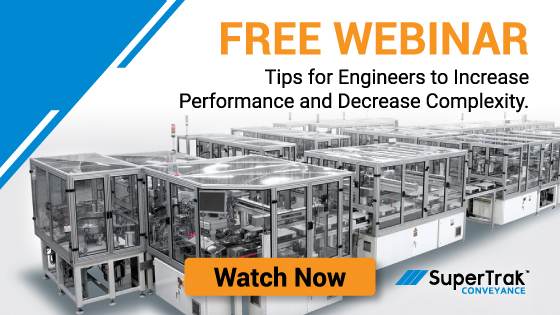