Around the Trak: New Technology and Change Management

Change of any kind is hard for a variety of reasons. Successfully implementing new technologies follows the same basic change management principles you may see elsewhere in your business.

We need to overcome inertia in people and companies, which can occur for a number of reasons. Without getting into all of the drivers of inertia (perhaps another time), I’ll walk through some change management best practices for leaders and change drivers that aspire to use technology as a differentiator for their business.

A guiding principle to change management that I’ve observed builds on a concept highlighted last month in my strategic partnership blog. Everyone that is needed to successfully introduce new manufacturing technology likely isn’t on your team, or maybe even a part of your organization.

Working for a world-leading automation company, I regularly interface with organizations implementing new technologies. One of the biggest pitfalls I see many of them make is that they often mistake the team that has identified and developed the technology as the right team for implementation.

Understanding that change is hard because everyone doesn’t see the world, in the same way, is fundamental to being an effective change driver.

The companies that we see drive seamless technology implementations, understand that the ball will be passed from one team to the next. That everyone plays their role both inside and outside the company.

Successful change drivers develop strategies and communication plans from the outset of the project to transcend barriers in the broader team and leverage their partnerships to bring expertise when it is needed. Breaking down barriers and driving alignment on the definition of success is critical in driving change.

One of the best examples of change management I have observed, was the use of completely new technology, with the goal of accelerating the implementation of a brand-new production facility. The leader driving the change made certain that communication across all stakeholders, those responsible for executing the project and those impacted by the project down the line, was a key priority.

Outside of the standard project kickoff (PKO) and division of tasks among the project team, in this example, communication kickoffs were set up with all the major groups impacted in the days following the PKO. Key partners were brought in for the kickoff meeting and then stayed to present to other groups. Communicating the vision of the new facility, the reason the technologies were selected, and how they would be helpful in the facility startup was key to their success.

Reflecting on why this path was so effective, it highlights that while the change driver may not be in sales, you are selling an idea when driving change. 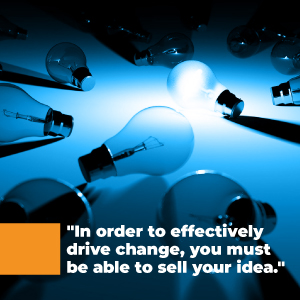 The more effective you can be at explaining why you are making the change, the more likely you are to succeed.

Simon Sinek very famously explains how starting with the ‘why’ helps to inspire change. His TED talk “Great Leaders Inspire Action,” does a good job of illustrating that as leaders you need those responsible for change to understand the purpose of what they are doing.

While most of his talk is regarding people buying products, “People don’t buy what you do, they buy why you do it”, the principles for driving change are the same.

You are about to drive a cross-functional team of people with a variety of viewpoints, goals and backgrounds. To get the team aligned, they need to understand why you are proposing to change the status quo.

“We’re doing this to save money” is unlikely to inspire the commitment required to transform, but explaining how the new technology will enable them to better perform their job to reach their targets which will in turn help the business reach their financial goals, would be a better approach.

I truly believe that building early momentum is one of the greatest factors in driving success in a big project. That belief was created early in my career with one of my favorite examples of change that I have observed.

While consulting with an early-stage company that was about 18 months into their journey, the CEO wanted to pivot the company to focus their hardware in a new market. In order to do so, they would require integration with a new partner.

The CEO was convinced that this was the only way their business would succeed long term, as currently, they were running out of time to show financial success.

What, in my belief, made them successful, was that the CEO understood that the team would be skeptical at the change, had a good understanding of the amount of work a new partner would require, and was sensitive to the fact that the team knew they had minimal time left to prove success. The CEO knew that the largest challenge would be convincing the team that this task was in fact possible.

To combat the perception that this task was insurmountable, the CEO meticulously mapped out and communicated an execution plan that targeted a major win every two weeks. Her fundamental belief was that metrics drive behavior, and it was her job to choose the right measures in driving change.

The team was split into two main areas (technical and go-to-market) to focus on two interlinked tasks at a time. Success was not achieved if either group didn’t hit on their part of the plan in their two-week sprints.

The ultimate goal of the plan was to break the very large challenge into achievable, digestible milestones. Once a certain threshold was met by either team, their KPI would shift to something that was a little closer to the overall goal of revenue derived from the new market.

It was amazing to see the momentum shift in her team from skeptical optimism to full steam ahead after the first two milestones were completed.

The fundamental understanding of needing to drive early success as well as what was needed to drive a major shift in approach is something that will never be lost on me. With my SuperTrak team, I often use the term “start the snowball rolling down the hill” in my day-to-day activities when driving transformational change. This example above is the one that started me using this term because the two-week milestones built momentum like a snowball rolling down a hill.

It is much easier for a large group to rally around a large initiative if there is early success toward the much more challenging objective. Setting objectives that are relevant to the short-term success of the project are equally, if not more important, than the ultimate objective.

Teams of people can do amazing things if the task at hand doesn’t appear insurmountable. Those that drive change well understand this. Find ways to create early wins that accelerate progress to the end goal and demonstrate consistently that the team is winning.

As a driver of any change, including the implementation of new technologies, you need to ensure that you’re all in.

You’re going to experience challenges along the way because change is a hard… period. Whether it is with good reason or not, someone will highlight a reason why what you are trying to do won’t work. It is too hard, not worth the time, too risky, etc. When the challenge arises you need to never waiver, or you give credit to the primary alternative… which is to do nothing.

Every time the SuperTrak team has observed effective change, it is always spearheaded by a passionate leader who has a deep belief in technology and its positive impact on the company.

This includes those senior to you, but more importantly your peers that will help illustrate commitment throughout a cross-functional team. Doubt in the initiative arising from a leader will fuel more inertia and severely diminish its chance of success. Having a strong “why” for taking on the initiative will help gain commitment.

Forbes actually lists change “battle fatigue” as the number one reason change fails. The article details organizational change examples, however, it’s relevant to driving change within organizations. Commitment from the change driver can never waiver until the objective is met.

Implementing any new technology in your company should be looked upon through the lens of change management. Not only for top-level buy-in, for but implementation and adoption success as well.

If I’m being honest, if you don’t believe in the change you’re trying to make you’re likely not the best person to drive implementation.

“If you don’t believe in the change you are trying to make, you’re likely not the best person to drive implementation.”

The opportunity is likely there to be a supporting member of the team and not the lead, or potentially choose a different path to achieve the goal If you are not all in, I recommend that you take a different path.

After the team reaches the initial goal, you deserve to celebrate and get a pat on the back. This is clearly a big milestone which like John says, should be celebrated. However, the work is not done and it’s your job to make sure momentum doesn’t fade.

Many companies become overly satisfied after a new technology is first implemented and run the risk of not realizing their ultimate goal. Until the new technology has been institutionalized, there is still a chance to drive. Once a new line is running, for example, there are processes and workflows that need to be adopted by a new set of stakeholders.

Build this into your plan as the change driver. In order for transformational change to take hold, you need to evaluate what happens when the team members not involved in the initial implementation begin their work.

One of my favorite implementation examples is one where the core integration team also had a KPI regarding the number of internal hours were needed for one year following the change.

Having the team understand up front that this was one of the measures of success, was the driver to implement good training practices and communication upfront, and more importantly maintained a sense of ownership after the system was up running.

In a majority of the cases where there is difficulty integrating change, there is a perception of ‘throwing something over the fence’ for the next team to deal with. If this takes hold in your group, the difficulties that inevitably arise become more difficult to overcome.

New people, with different viewpoints and experiences, are an opportunity to continuously improve on the work you’ve just accomplished. Plan for this, continue to celebrate wins and sustain momentum.

Even the best-laid plans face challenges and you cannot account for every hurdle you may face but planning for change is essential to success. While the pillars of change I have outlined above may not be all-encompassing, they are a good place to start and I have seen them work several times amongst change leaders looking to implement new technologies in their organizations.

If you’re looking to implement new automation technologies in your business, the SuperTrak team can walk you through steps to achieve initial buy-in all the way through to achieving optimal functionality from your conveyance platform.

Our large team of engineers and support staff is there to take you from design to build to perform.

Get the ball rolling by reaching out to SuperTrakTeam@atsautomation.com