The standard configuration supports up to 64m in circumference. Contact the SuperTrak team if your system may require a larger circumference.

The main reasons that the SuperTrak GEN3™ system is quiet are:
• The SuperTrak GEN3™ system has very few moving parts. Each shuttle has 4 plastic rollers/wheels that provide low friction and a dampened rolling sound as they ride on the steel rail system.
• The built-in collision avoidance ensures no shuttle to shuttle contact or banging noise.
• There are no mechanical stop mechanisms required to precisely stop and locate a shuttle at a process station

There are many built-in mechanical and software features enabling smaller system sizes:

• For example, due to the size of the product being manufactured, it may be desirable to have 2 parts on a shuttle. In this case, due to differing process times, it may be beneficial to work on both parts at one time at one process, and at another station, work on 1 part, index the shuttle, and then work on the second part. This reduces the need to double up the tooling at the second process.

• In some cases, the high-speed shuttle transfer and automatic shuttle queuing have allowed a reduction in the number of parallel stations, resulting in less space consumed.

• Flexible shuttle positioning and routing can facilitate running multiple part types on the same system while maximizing station re-use as opposed to a station or full machine duplication.

• Curved sections are fully usable for process stations. On many transport systems, the area where shuttles change direction is unusable, but on the SuperTrak platform, this area provides smooth and precise motion, reducing the need to extend the straight portion of the track.

The SuperTrak platform includes precisely controlled servo positioning that eliminates the need for hard stops, and the built-in collision avoidance ensures no shuttle to shuttle contact; which means that there are no large g-forces applied to the product. In addition, as each shuttle’s motion is fully configurable, it is possible to have reduced accelerations and/or velocities at processes that require even lower jerk.

OEE is the resulting product of Machine Availability X Machine Performance X Machine Yield. There are many ways that the SuperTrak platform may help. For example:

Low shuttle exchange times ensuring that process stations are sitting idle for the least amount of time possible between parts.

Smooth and precise movement and positioning ensure that the transport system does not contribute to bad part creation. 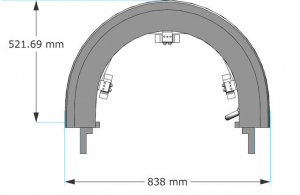 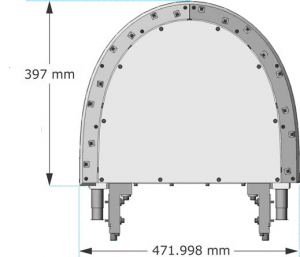 The SuperTrak GEN3™ platform includes fully embedded controls and power electronics that provide all servo control and shuttle trajectories. The system is configured using the Windows™ based TrakMaster™ software and is then ready to communicate and receive commands from a PLC (Programmable Logic Controller).

It is possible to have up-to 4 PLC interfaces on a single SuperTrak GEN3™ system.

The shuttles are very easily added or removed, in seconds, using the provided shuttle removal tool. As well, there are no programming changes required to run with more or fewer shuttles. This facilitates shuttle maintenance without significantly affecting machine OEE.

Yes. The shuttle acceleration and velocity are fully programmable and can be set as the shuttle is released from any stop location.

The Standard shuttle shelf length is 152mm and allows custom part fixturing (shelf) to be mounted that ranges from 152mm up to 500mm in length.

Having a simple I/O interface to the process stations around the SuperTrak GEN3™ system is possible for simple operations. Advanced motion options are still available through pre-configured motion configurations that can be triggered via I/O.

The TrakMaster™ software is a Windows®™ based application that communicates via a standard Ethernet connection to the SuperTrak™ controller.

A standard electrical control panel is available to provide ease of integration and design. The standard control panel provides the following basic features:
• SuperTrak GEN3™ controller
• Logic power supply with UPS
• Input voltages of 400Y230VAC or 208Y120VAC 50Hz or 60Hz
• Safety circuit contactors
• Support for up to 12 motor power supplies
• PLC slave interface
• The control panel is connected to the system at one of the 180deg section through a standard interconnect wiring assembly.

A standard mechanical design package is provided that includes models that are in SolidWorks™ format as well as STEP file format.

Yes, the SuperTrak GEN3™ shuttle carrier provides a precision/standard dowel as well as a keyed slot for mounting tooling to the shuttle.

Yes, the center portion of the GEN3™ platform’s loop is available for mounting tooling as this area is not required for access or maintenance. In addition, the SuperTrak GEN3™ section stands come pre-engineered with a convenient mount location for a tooling plate.

Nearly all electrical Motor Power consumption occurs during acceleration and deceleration of the shuttles and very little power is required to maintain velocity and standstill. Therefore, the average machine power draw may be very low. 300-400Watts for example. Of course, the power supply requirements must account for the peak power requirements. For this reason, it is recommended to perform a system simulation to identify peak power requirements.

The SuperTrak GEN3™ system complies with the requirements of cleanrooms Class 1,000 (ISO-6).

Generally, this is not required as the permanent magnets on the shuttle are fully covered and the electromagnetic coils provide no magnetic field when not in use. As well, the face of the motor and wheel riding surfaces are vertical, which prevents debris from settling on these critical areas. However, the track does also provide a convenient t-slot that can be used for mounting a shroud/cover (or other devices) in cases where it is felt necessary.

Development started in 1995, with the first proof of concept shown at a trade show in 1998. Systems have been running in house since 1998.The first production system was installed in 2002.